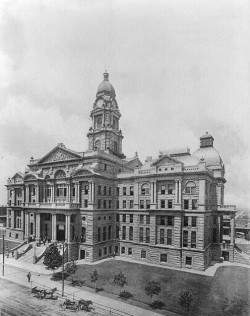 The Tarrant County Courthouse, completed in 1895. It was constructed at the price of $408,840. It was thought that this was too much to pay for a courthouse so the county officials responsible were thrown out of office. The courthouse is a four story building of red granite in Renaissance Revival Style. The walls at the base of the building are five feet thick. 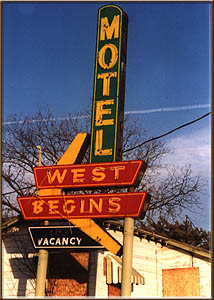 In 1843 General Edward H. Tarrant and General W. Terrell met at the abandoned Birds Fort in the northeastern corner of Tarrant County (then named Navarro County). They negotiated with the leaders of nine Indian tribes. This resulted in the signing of the "Birds Fort Treaty".
The Treaty called for an end to conflict and established a line separating Indian lands from Territory open for colonization. This is how Fort Worth became known as the city “Where The West Begins”. This photo was taken by me years ago. The sign and and motel are gone now. The past is fast slipping away.