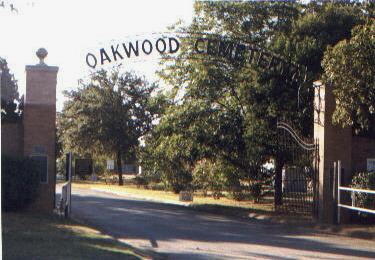 Sometimes called the Westminster Abbey of Fort Worth, Oakwood Cemetery was founded in 1879 by John Peter Smith, one of Fort Worth’s first settlers. He donated 20 acres to the city of Fort Worth. The cemetery was later enlarged to 100 acres. The burial area consists of three cemeteries: Oakwood, Calvary and Trinity. 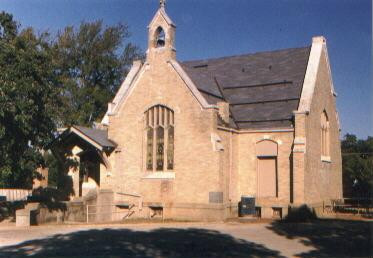 View of Chapel from the South in the early morning sun. The Oakwood Memorial Chapel – erected 1912.

Inscriptions scattered through this website are taken from gravestones in Oakwood Cemetery. 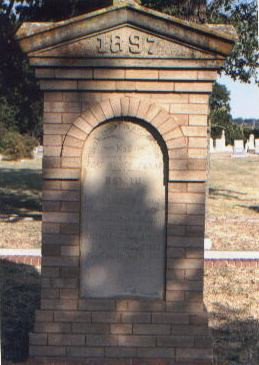 “He Giveth His Beloved Sleep”

“Sleep On In Peace- With Jesus”

Old wood board marker, revealing only the weathering of many years.

“See You In The Morning” 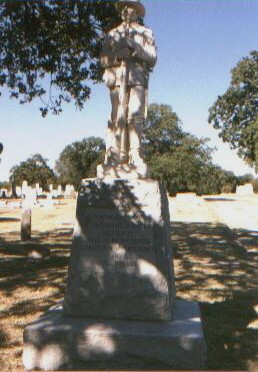 Statue of a Confederate Soldier stands an eternal watch over the resting places of his comrades. 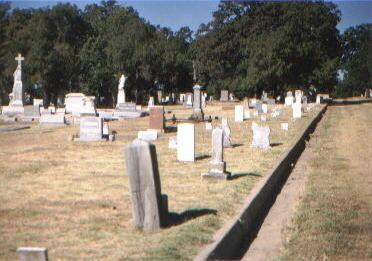 “Soldiers’ Row”, established in 1903 for the burial of Confederate Veterans.

Carswell Memorial Park. Major Horace S. Carswell Jr. was the first person in Fort Worth to receive the Medal of Honor. 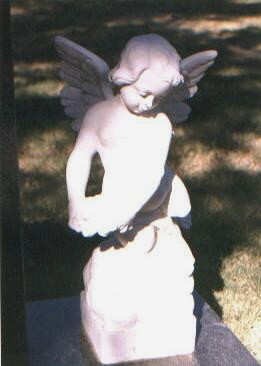 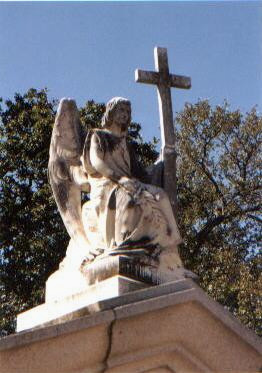 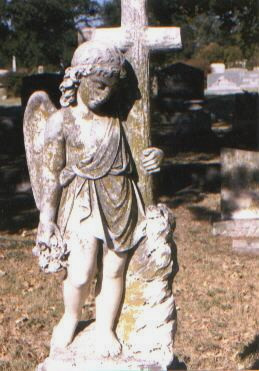 “Mother Our Home Is Broken”

“Loved In Life, Cherished In Death”

“The Most Wonderful Mother” 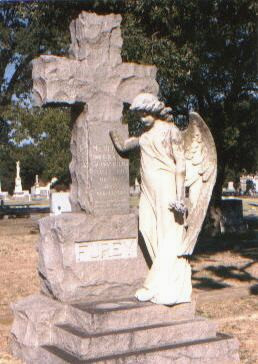 “Sleep On – In Peace With Jesus”

“Tho’ Lost To Sight
To Memory Dear”

“Goodbye, I Am
Going To Sleep” 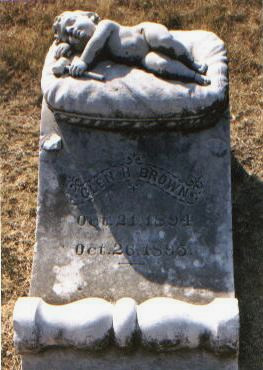 “See You In The Morning” 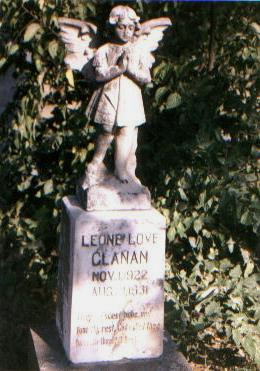 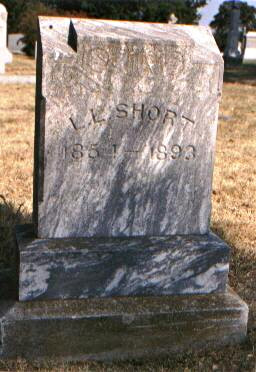 Luke Short, known as King of the Gamblers in Fort Worth. He introduced the new game Keno at the White Elephant Saloon. Short died Sept. 8, 1893 at the age of thirty-nine. His cause of death was described as “Dropsy” (a deterioration of the body). He paid $20 in advance for his burial plot. He died in bed. 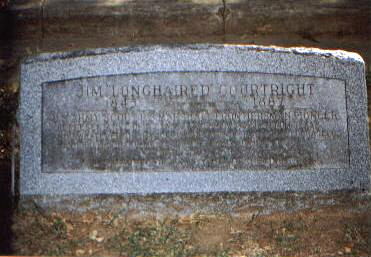 On Tombstone – Jim “Longhaired” Courtright 1845 – 1887. U.S. Army Scout, U S Marshall, Frontiersman, Pioneer, Representative of a Class of Man now passing from Texas who whatever their faults were type of that brave courageous manhood which commands respect and admiration. Erected 1953 – In Memory Of Him By His Descendants. 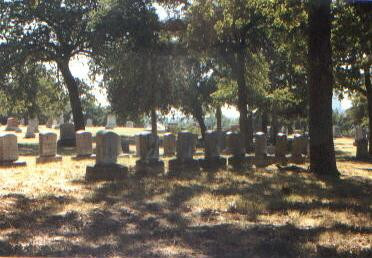 “Bartender’s Row”. In Early Fort Worth bar tending was a respected and honorable profession. 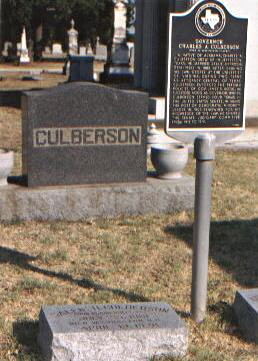 From the grave of
a nine year boy 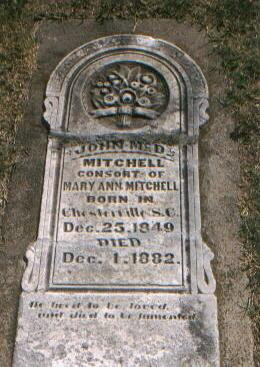 (1) A Husband or Wife,
especially the Spouse
of a Monarch.
(2) A Companion or Partner

To coexist, cohort, live with, walk with, keep company with, hang out with, attend, protect, escort. 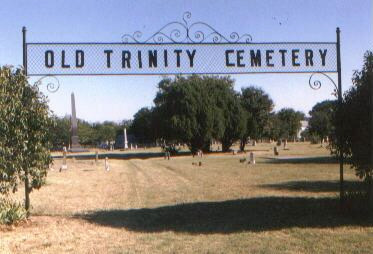 Trinity Cemetery – “Black Section” – The tall Obelisk in the background is a monument to “Gooseneck Bill” McDonald, a Negro banker and politician. Some of his family are buried here, but he is not. 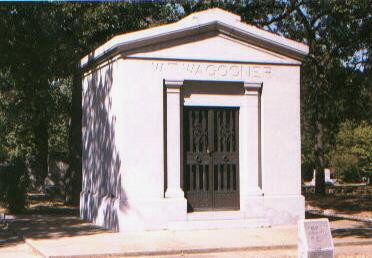 W. T. Waggoner – Texas Rancher and Oilman
By 1900 over 50 million barrels of oil had been pumped from his land making him one of the richest men in Texas. W. T. built Arlington Downs, a one and a quarter mile racetrack in Arlington.

“Resting In Hope Of A Glorious Resurrection”

“There Are No Partings
In Heaven” 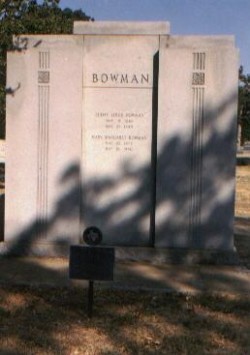 Fort Worth native Euday Bowman was a ragtime composer. His best known song was “12th Street Rag” which he wrote about his experiences in Kansas City. Another song written by Bowman was “Fort Worth Blues”. It was never published. He died in New York City in 1949. 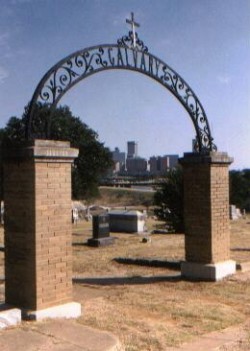 There were no bridges across the Trinity River in early Fort Worth. All the Catholic funerals were held downtown at the St. Patrick’s Cathedral. The funeral procession had to cross the river at shallow fords. Sometimes the water was high and the horses and mourners could or would not cross. There was a saying among the early day Catholics – “He is a good friend, he will follow you all the way across the river.” In the far background is the Red River Texas and Southern Railway Bridge built 1902. It is one of the oldest surviving railroad bridges in Tarrant County.

Now as you pull out onto Grand Avenue from the cemetery, turn right. At 609 Grand, on your left, you will find George Hilton’s Bicycle Tree. If it’s winter and there are no leaves on the tree, you can see the bicycles nestled in among the limbs. It’s a little harder to see during the summer.