Photos taken on the streets and sidewalks of Tarrant County. 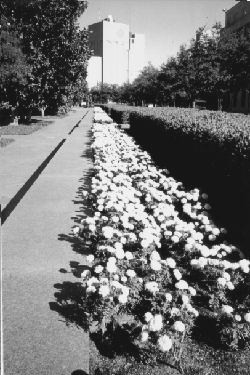 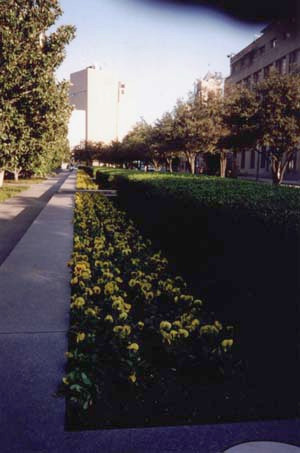 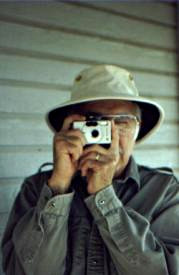 This is my new “Spy” Camera. It is a Canon ELPT LT APO (which stands for Advanced Photo System). It’s dimensions are 3.4 x 2.2 x 1.4. It weigh 4.1 oz. It shoots 25 exp. And is fully automatic with a Canon 23 MM f 4.8 lens. It has a self-timer and a built in flash. It has lots of other bells and whistles that I don’t use. It shoots three types of prints. You can chose regular size, wide size or panorama prints, and you can alternate between them. As you can see in the photo, it’s about the size of a pack of cards. It hides real easy in your shirt pocket. I felt like a real under cover spy when I took the picture of the men’s room that you will see later. All photos on this site (except the picture of me and the camera which was taken with my 35 MM Camera) have been taken with this camera. So far all pictures have been taken within the boundaries of Tarrant County, but that could change.

Spray paint artist at a street festival in Handley.

A pinwheel of kittens drinking milk
out of a pan for the first time. 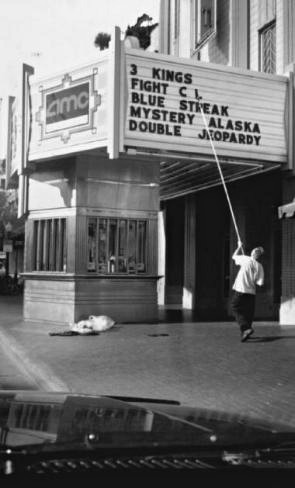 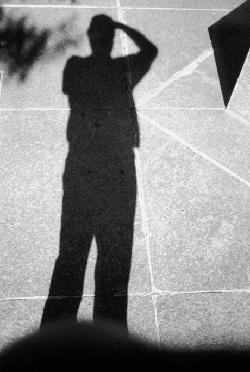 This is me. A self portrait taken in Burk Burnett Park. 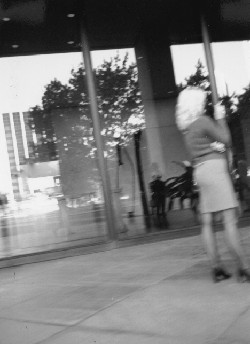 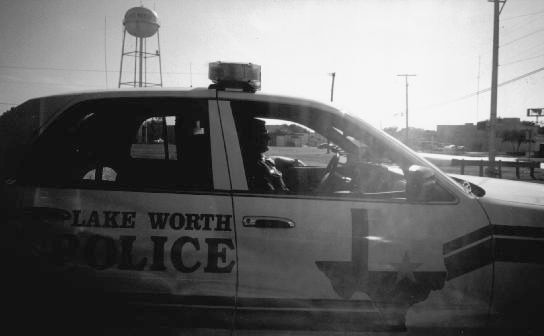 The Police – Stopped at a red light in Lake Worth.

I take a lot of my pictures through the windows of my truck, so I have to keep the windows fairly clean (no bug guts). When I see a potential photo, I quickly snap the photo before the subject can tell what I’m doing. Sometimes I get caught. I just look straight ahead and pretend to not notice. So far it has worked. 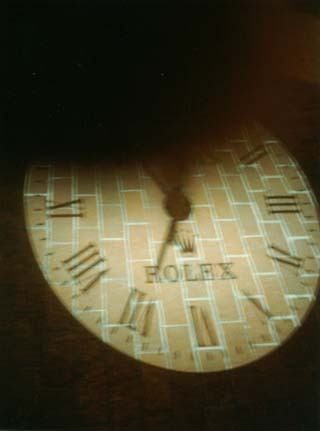 A Projected image on the brick sidewalk outside Haltoms at the corner of Main and Third in downtown Fort Worth. 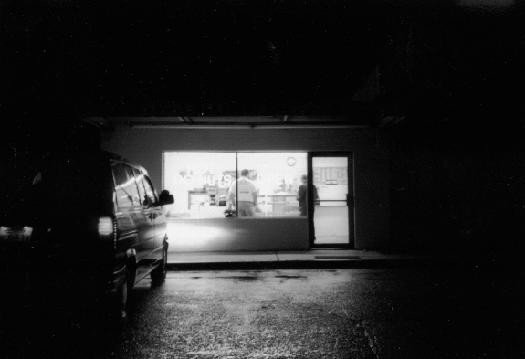 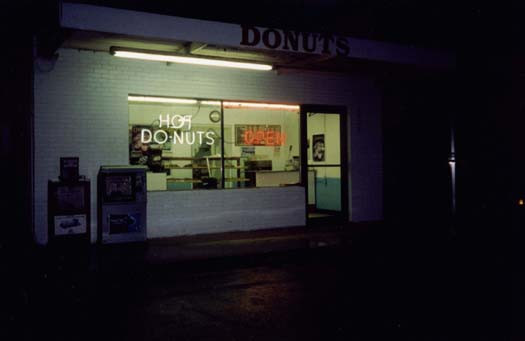 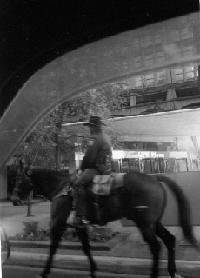 Cowtown Mounted Police Officer. Much of the time you have no idea what kind of composition you are getting. Just after I took this shot he looked right at me. Caught me. 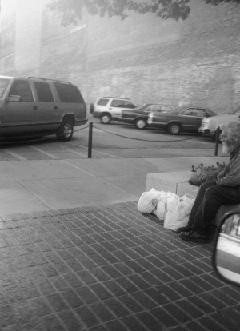 This old guy is on this corner almost every day about 3:45P.M. 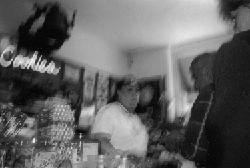 Cookies – Taken by accident when my finger pushed the button at the Paris Coffee Shop.

This was supposed to be a picture of a guy on one of those hydraulic lifts, but all I got was a picture of his butt. That’s my truck in the reflection in the window. 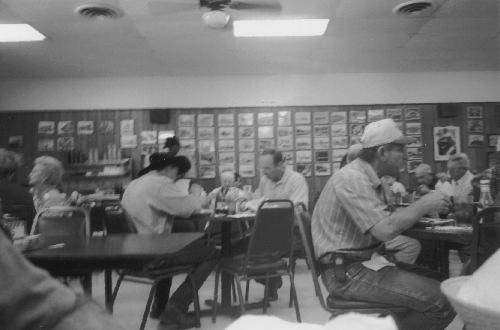 On the Streets of Fort Worth. There is a man under this wad of blankets.

Photo of me.
Neva took this one as we were heading out of town down Hwy 199 one afternoon. 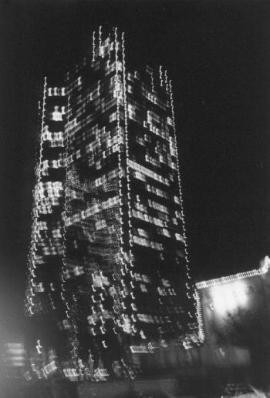 City Lights – Fort Worth taken on a Wednesday night about 7:00 P.M. or so.

View of downtown Fort Worth from Hwy 121. 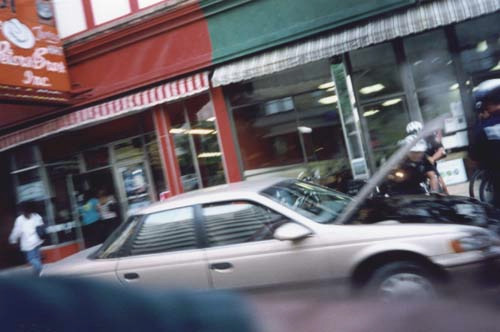 This lady’s car had broken down in the street.
There were about six bicycle cops there. 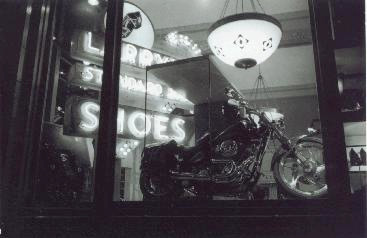 Why have a convertible if you are going to have the windows up? 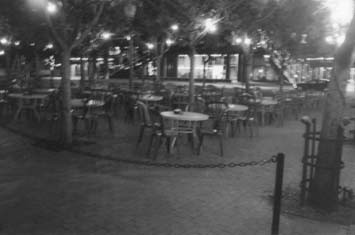 Sidewalk cafe in downtown Fort Worth. 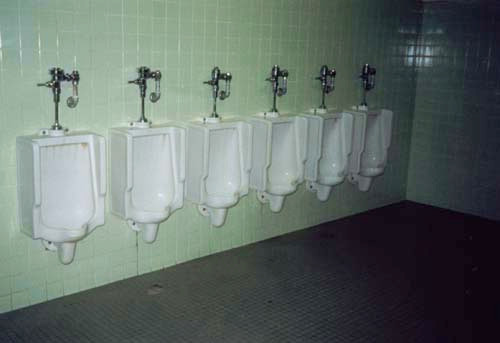 A never before published photo of the men’s urinals at the
Montgomery Street Antique Mall. 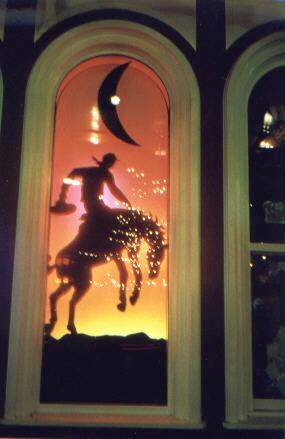 Caravan of Dreams’ window display on a Wednesday night about 7:00 PM. 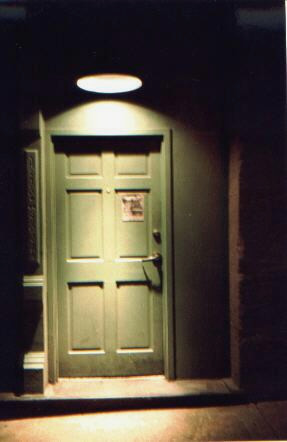 What’s behind the green door? Remember that song from the late 50’s? Downtown Ft. Worth. 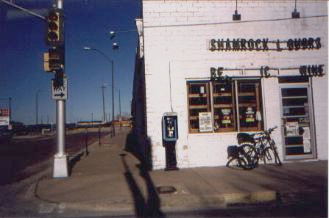 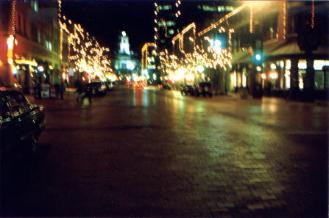 Tarrant County Courthouse about 5:10A.M. on a rainy day. Slow film speed and movements of camera made squiggly lights.

Sign in the plate glass window at an eatery on Jacksboro hwy.
just outside of downtown Fort Worth.

Side street in uptown Fort Worth. Love that hat. Wonder if you can buy one of them at the kitchen stores? I would like to wear one when I’m cooking hamburgers on the grill outside. 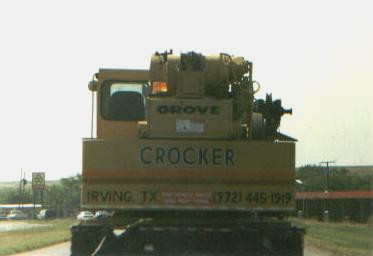 Hwy. 199 in Lake Worth. Saw this truck going down the street so we made a u-turn and took this picture through our pickup windshield.

Now this is one NEAT hood ornament.
Just what you would expect on the downtown streets of Fort Worth Texas.

“Will work for cat food” On the streets of Mansfield Texas Lester E. Crocker Sr.