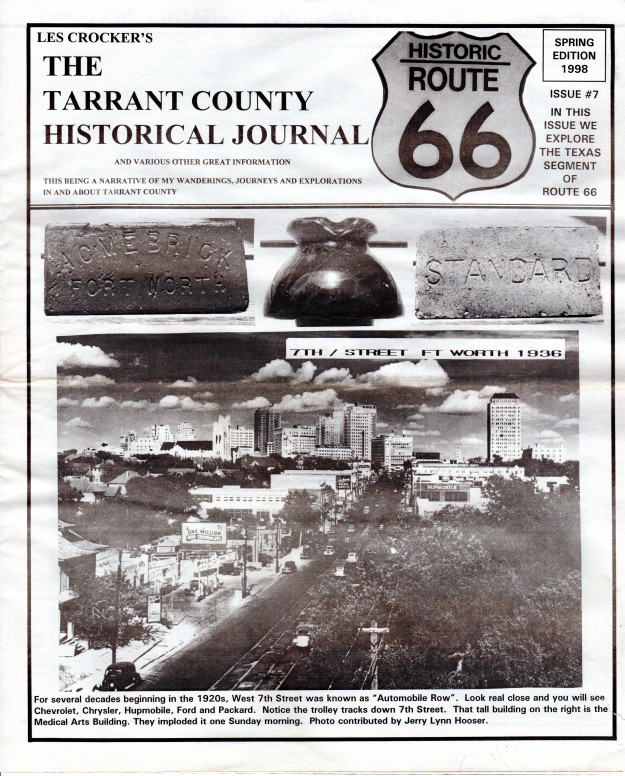 The following is just a sample of the pictures and articles in the 20 pages of issue #7.

From the Fort Worth Democrat
Nov. 25, 1876 – Three proprietors of Dance Houses were fined $10 a piece and forbidden to open again. The Democrat suggests that if they have to be operated, they should be restricted to unfrequented portions of the city where their orgies will not disturb the citizens.
Nov. 29, 1876 – Another soiled dove crosses the river. Yesterday morning another of the Demi Monde, weary of the trials and tribulations of her life, took a dose of laudanum and morphine. The last suicide of such nature was about two weeks ago.
Jan. 16, 1877 – Blood has been shed at the Dance Houses. Close them out.
Feb. 5, 1877 – These dens of vice and immorality are open night after night contrary to the law and sworn officers wink at and permit them to go on, knowingly and willfully.
April 27, 1879 – As a result of the order issued to the City Marshall by Mayor Beckham to enforce every ordinance on the books to the letter, 23 fast and fancy girls of the Arena were taken in tow.
Aug. 5, 1879 – The frequent discharge of firearms after dark in the Eastern part of the city is the source of much complaint.
April 19, 1887 – The festive burglar has no soft snap when he invades a Fort Worth domicile at dead of night. The average Fort Worther keeps a gun and knows how to use it.
May 17, 1887 – It’s a cold day when the Half Acre doesn’t pan out a cutting or shooting scrape among its male denizens or morphine experiment by some of its frisky females.

Rufus Coates was the last man to be executed by hanging in Tarrant County. He was hung on November 8, 1918 for the murder of his sweetheart, Zella Faulk. From his cell window in the old jail he could see the tree near Oakwood Cemetery under which he stabbed Zella to death. The old jail was located at what now is Paddock Park. There was a tunnel from the jail to the Courthouse that went under Belknap Street.

Even More “At The Movies”: Did You Ever Notice?
If you need to reload your gun, you will always have more ammunition even if you haven’t been carrying any before now.
You’re very likely to survive any battle in any war – unless you make the mistake of showing someone a picture of your sweetheart back home.
The Eiffel Tower can be seen from any window in Paris.
Interbreeding is genetically possible with any creature from elsewhere in the universe.
Kitchens don’t have light switches. When entering a kitchen at night, you should open the fridge door and use that light instead.
The Chief of Police will always suspend his star detective – or give his 48 hours to finish the job.
Any person waking from a nightmare will sit bolt upright and pant.
It is not necessary to say hello or good-bye when beginning or ending phone conversations.
If you decide to start dancing in the street, everyone you bump into will know all the steps.
When a person is knocked unconscious by a blow to the head, they will never suffer a concussion or brain damage. 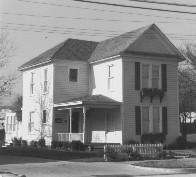 3126 Handley Drive, built in 1906. This house was not built on this location, but was moved here in 1931 from nearby Lancaster Ave. William & Rose Weiler moved to Handley in 1892. Weiler was a prominent businessman and very active in the community. He was President of the First National Bank of Handley and also owned an insurance company. Rose Weiler died in 1934. William Weiler lived in this house until he died in 1936. Next door to the Weiler House is the old Handley Post Office. Mr. Weiler had this building built for him in 1931. The original Post Office was located on East Lancaster. Rose Weiler was the Post Mistress until the late 1920’s. It is now a private office.

He Brought First Bathtub to Fort Worth
As Fort Worth grew, it grew with the familiar sight of Thomas Patton Day striding down Main St. in full beard under his favorite derby hat, carrying his gold-headed walking stick. If Mr. Day was not the best scrubbed gentleman in Fort Worth, he ought to have been. He owned the first bath tub with running water in town. Building his way here into the role of prominent merchant and inventor, Mr. Day lived in the elegant old home at 100 Penn for many years. It was there his grandson, Ernest L. Day, was born in 1895.
Recently, Ernest Day of 1504 Enderly Pl. E., now 64, found a covey of yellowed photographs long stuck away in a corner of his warehouse at 1623 8th Avenue – ancient pictures taken of and by his grandfather. With his son, Press Art Editor Owen Day, he began digging into grandfather’s life and times. From this comes a story of a city’s progress.
Fort Worth’s life with grandfather began in 1876, the year the first train came breathing hot cinders into town. T. P. Day was on hand to greet the T&P that day. His wife and four year old son were aboard it. Mr. Day had arrived several weeks earlier by wagon and opened a photographers tintype studio here. He hauled lumber and furniture clear from Dallas to build their home on Village Creek. Mrs. Day second cousin to President Zachary Taylor, was the daughter of a Louisiana plantation owner. Mr. Day was already 36 when he moved here, but full of the red-blooded pioneer zing. She wore a wedding band made from gold he’d mined in the Chihuahua State of Mexico. He built a home at Weatherford and Lexington and then moved into the mansion at 100 Penn, after establishing a jewelry and pawn brokerage, his firm installing the clocks atop the Courthouse.
Then came his big bicycle and sewing machine business at Houston and 4th, where he invented a formula to build rubber tires that were solid yet had give when rock and ruts in the roads were hit. His patent made him a profit in early French gas carriages in England, Canada and many parts of the US. He owned the third automobile purchased here.
By 1911, he put – putted down the city’s dusty streets, his beard parting in the wind, his eyes covered with large goggles, in a Rambler that had 336 on its license plate and sat seven passengers. He dug the first artesian well here, which accounted for his bath tub, and then sent drilling teams into West Texas to dig deep water wells for parched ranchers. He found helium gas on the Matador Ranch, searching for water.
Toward the end, which came in 1924 when he was 84, Mr. Day used to ride the trolley into town to laugh at the latest vaudeville shows. He and his wife, who died in 1936, are buried in Pioneer Rest Cemetery.

Reprinted from the Fort Worth Press Friday, May 20, 1960.
Permission by Owen Day.
Story contributed by Barry and Annette Marsh. 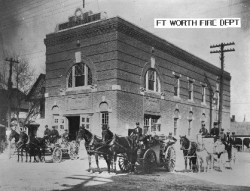 Fire Station #1 at Second and Commerce St. downtown Fort Worth – built in 1907. Notice the houses on the left side and what looks like a horse stable on the right. Love those old fire engines. Photo contributed by Jerry Lynn Hooser.

1010 Texas Street. Bought is photo at the Weatherford Flea Market. When I was about 8 or 10 years old, Margaret Burgoon would bring their son, Johnny, Jr., to my Grandmother’s house to play.